The 20th of May 2022 is a date that is forever etched in our minds, a date that Ambulance Victoria lost one of their own, A family lost their beloved mum and as funeral directors, we had to dig deeper than we ever had before.

Pauline Smith, A wife, mother, sister, and friend of many. A paramedic and former policewoman was killed in a car accident on her way home after working nightshift by an impaired driver. A phone call that would change everyone’s lives.

It was only eight short weeks before this phone call that Pauline had reached out to Brember Family Funerals to arrange her beautiful mum, Betty’s funeral. Pauline wanted to give her mum the best farewell she could. Betty would have been so proud; Pauline gave it her all, and with our help, we gave Betty a beautiful funeral that will be discussed for years to come. Our director and celebrant, Chris Brember made people laugh as much as they did cry, He honoured Betty’s wonderful long life perfectly.

A week before this phone call, I returned Betty’s ashes to Pauline and her family. They welcomed me into their home like I was family to them, it was an emotional time, but we laughed and cried and promised to stay in touch.

Pauline’s husband was in utter shock, but he was adamant Pauline wouldn’t want anyone else to care for her family, Brember Family Funerals, to her, were family.

Disbelief and sadness washed over us, knowing the emotional connection and bond we all shared with this family. The day of the funeral arrangement, I walked along the path to the Smith’s front door, familiar faces, big hugs, and lots of tears. No one could believe we were meeting again so soon.

During the arrangement, Pauline’s husband knew exactly what he wanted. Pauline was the kind of person that gave endlessly to others, He wanted to give her a farewell that was fit for a queen. His queen.

The involvement from Ambulance Victoria and Victoria Police was incredible, we couldn’t have asked for better support. They co-ordinated an ambulance, a police car, both AV and VP Helicopters as well as the police pipers and drummers. Epic doesn’t begin to describe the effort made.

Chris delivered an incredible service, it was emotional, heartfelt and at times quite humorous. Pauline’s family, friends and co-workers all contributed with stories they told and the memories they shared.

Hundreds of Police and Ambulance officers made a guard of honour upon leaving the chapel at Bunurong Memorial Park. An ambulance, police car, drummers and pipers lead her hearse away as the helicopters made a pass above.

Once the day was over, we shared our own stories and shed our own tears. The people we care for become an extension of our Brember family.

One week later, I returned Pauline’s ashes home to her family to rest beside her sweet mum. 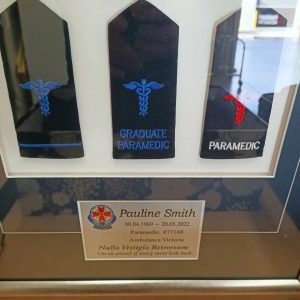 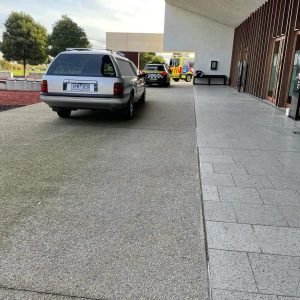 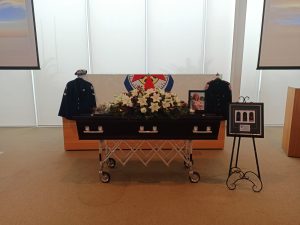 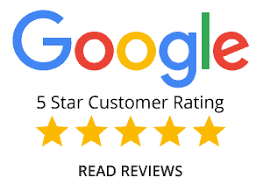